PALU, INDONESIA – OCTOBER 02: A mosque that was previously partially submerged sits at an angle after it was knocked off its foundations by an earthquake and a tsunami, on October 02, 2018 in Palu, Indonesia. Indonesias disaster response agency confirmed on Tuesday that the death toll from Fridays earthquake and tsunami has reached at least 1,234 people while fears that the death toll could rise again. A tsunami triggered by a magnitude 7.5 earthquake slammed into Indonesia’s coastline on the island of Sulawesi as people are increasingly growing desperate for food, fuel, and water, while emergency services fear that survivors may still be trapped under the rubble. (Photo by Carl Court/Getty Images) 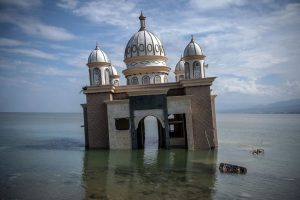