1952: American film producer and director Cecil B DeMille (1881 – 1959) stands in front of a large carnival painting and looks through a framing device on the set of his film, ‘The Greatest Show On Earth’. The painting shows a woman in a jungle outfit, wrestling a giant snake. (Photo by Hulton Archive/Getty Images) 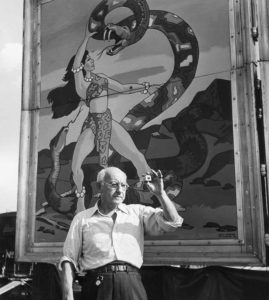