9th October 1948: British film director Carol Reed (1906-1976), sitting on the staircase of the elaborate set where most of his film ‘The Fallen Idol’ takes place. Based on a story by Graham Greene, the film is alternatively titled ‘Lost Illusion’. Original Publication: Picture Post – 4623 – Carol Reed : Director Of Acting – pub. 1948 (Photo by Bert Hardy/Picture Post/Getty Images) 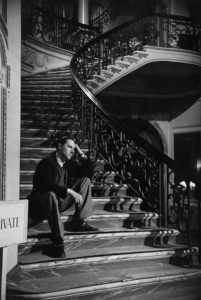