13th March 1965: British pop band The Beatles bidding farewell to their fans at London Airport as they leave to continue production of their film ‘Help’ in Austria. (Left to right) George Harrison (1943 – 2001), Paul McCartney, Ringo Starr (with Maureen) and John Lennon (1940 – 1980, with Cynthia) (Photo by Dennis Oulds/Central Press/Getty Images) 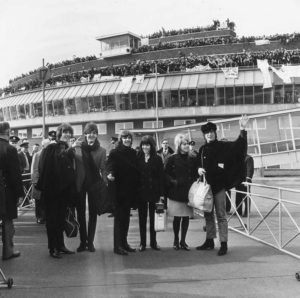