BENONI – MARCH 3: John Davison of Canada dives but fails to stop Chris Cairns of New Zealand scoring a six during the ICC Cricket World Cup 2003 Pool B match between Canada and New Zealand held on March 3, 2003 at the Willowmoore Park, in Benoni, South Africa. New Zealand won the match by 5 wickets. (Photo by Mike Hewitt/Getty Images) 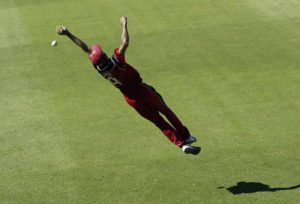